Apartments in Dallas, TX for Rent

If you are interested in living in a growing city with great employment prospects, a business-friendly climate full of glitz then a Dallas, TX apartment is for you. 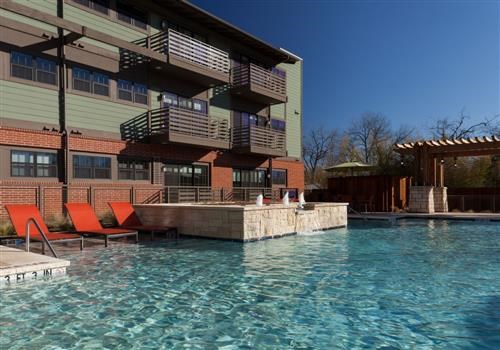 Dallas, TX is a thriving city known as a hub for technology, cattle, oil and the telecommunication's industry. Dallas, TX has 18 fortune 500 companies located within its boundaries offering its residents immense employment opportunities. In addition, Dallas, TX is home to the second most valuable sports franchise in the world - the Dallas Cowboys.

If you're a sports fan, then an affordable apartment in Dallas, TX has a lot to offer. Dallas is home to five major sports teams including the Dallas Cowboys (NFL), Dallas Mavericks (NBA), Texas Rangers (MLB), FC Dallas (MLS) and the Dallas Stars (NHL). Even if you're loyalties don't lie with a local franchise, your favorite team is sure to visit Dallas regularly. The Dallas, TX area is the only region in the country that is represented in the five biggest professional sports teams and hosts a bowl game in the College Football rotation. Since the late 80's Dallas, TX has had the honor to host a Super Bowl, the World Series, NHL and NBA finals; All-Star games; Women's U.S. Open Golf Tournament and much more. Interested in sports and being close to all the action? Then consider a luxury apartment at Autumnwood communities which is conveniently nestled between the Dallas/Fort Worth area close to all the entertainment. With our 1, 2 and 3 bedroom apartments you are sure to find something to suite your needs.

You may not initially think of Dallas, TX as an artistic and cultural city with such an emphasis on sports, but the giant city has a thriving Arts District. Dallas is chock-full of museums, music venues, and art galleries. The Dallas, TX Arts District is the largest in the nation and truly in a league of its own. This massive arts District spans 68 acres and 19 blocks and is comprised of museums, performance halls, restaurants and even a school. In this massive arts district you can catch a performance of the Texas Ballet Theater, a Broadway show, local musicians performing or even a Ted talk. It is possible to spend every weekend in the arts district and never run out of exciting events. An apartment for rent near artistic attractions may not be uncommon but few measures up to Bell Apartment living. If being close to all the action and luxurious living appeals to you, then consider an apartment in the upscale Bell Design District.

Finally, if you're a young professional, Dallas is known as the home of corporate America. Dallas, TX central location to the rest of the Country is favorable for corporations and is also a favorite convention site. An apartment in Dallas, TX offers many job opportunities as this Texan city is home to the 2nd largest concentration of fortune 500 companies. The job market in Dallas is well established in industries such as banking, oil, technology and health care.

Whether you're in the process of searching for apartments in Houston, TX, or Arlington, TX consider Bell Apartments as your first choice. We pride ourselves in offering a standard of living, unlike any other apartment community for our residents. Contact us today to learn more or take a personal tour. No matter if you need a 1 bedroom apartment or a 3 bedroom apartment we have you covered. Our professional Bell Apartment representatives are ready to show you the pinnacle of luxury living.

You can compare maximum four properties.

Would you like to compare the first four items you selected?

You have selected minimum two properties to compare. You can directly compare now from generated link here.